Geek Software of the Week: Clonezilla! 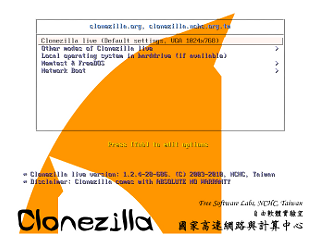 This is AWESOME! Open Source, FREE, and it handles nearly everything that you need for disk imaging! Also, there is a FREE Server Version as well as the regular PC Client Version!

You’re probably familiar with the popular proprietary commercial package Norton Ghost. The problem with these kind of software packages is that it takes a lot of time to massively clone systems to many computers. You’ve probably also heard of Symantec’s solution to this problem, Symantec Ghost Corporate Edition with multicasting. Well, now there is an OpenSource clone system (OCS) solution called Clonezilla with unicasting and multicasting!

This site uses Akismet to reduce spam. Learn how your comment data is processed.

Support us by Becoming a Patron!

Dr. Bill Bailey retains the copyright to all original content. Posted content from other sites, blogs, or news sources are the property of their original owners, and I do my best to note that specifically on all material on the site.

I do aggregate items from other sites to provide Tech News for our readers.